I swore to myself I’d never ride a boda boda out to Te Okot or anywhere else that far away again.

And yet yesterday morning I found myself on the back of Bitek’s sport bike.  The knobby tires made quick work of the slick mud that is half of the road to Te Okot.  All hope I had of arriving to the village in any sort of tidy condition was quickly taken care of by the skunk stripe of mud up my back and the mud splattering my face.  The road was so rough that every tooth nearly rattled out of my head.  My shoes were slick with mud and my feet were full of pins and needles from sitting in the same position for such a long time.  My feet kept slipping from the foot pegs, so that I burned a nice commemorative quarter-sized exhaust pipe tattoo above my right ankle. And we’ll just not even go into the condition of my hind quarters, which are still not speaking to me for the atrocities I committed against them by taking a boda out to Te Okot and back, not once, but twice in a single week.

Mud stripes, exhaust pipe burns, rattled teeth and a tush that will probably be on permanent strike-all of those minor inconveniences pale, pale, pale in comparison to hardship of living without drinkable water.  And for me, those minor pains couldn’t hold a candle to the hope I held that when Bitek surveyed the land, he’d find a viable place to drill for water.

We reached Bungatira and I laughed when Denis greeted me by shouting,

“Acureque!”  (I have no idea how to spell that word.) In Acholi, it means something like, “You’ve kept me waiting!”

It’s our joke because each time Denis would pick me up, I’d put my hands on my hips, furrow my brow and shout, “Acureque!”  Then as we pulled away, we’d break into peals of laughter at the shocked faces of the surrounding Acholis who were stunned to hear a Muzungu shouting in Acholi.

So when Denis shouted it at me, I broke into a wide grin and hopped off Bitek’s bike, almost falling on my face because my feet, legs and rear had all conspired revenge upon me.  I regained my balance and hugged Denis hard, trying not to wince at how thin he’s grown, trying not to think of how little food he and his family have had access to lately.

After introductions, Denis led us inside his hut, which he’d worked hard to expand this week just so we could come inside and have a place to sit.

We sat inside drinking lukewarm bottled soda that Denis had purchased for just this occasion. Men and women and children entered the hut and greeted us, some staying and sitting with us, others shaking hands and returning to the hard work of life.

After a sufficient amount of rest in the hut, we tromped through the compound and through the bush to the water source.  Everyone followed us, except some of the women who were tending to the littlest children and the people who were too old to make the trek.  Men, women, children all trailed the Musee, Bitek and I.  We were quite the parade of people. 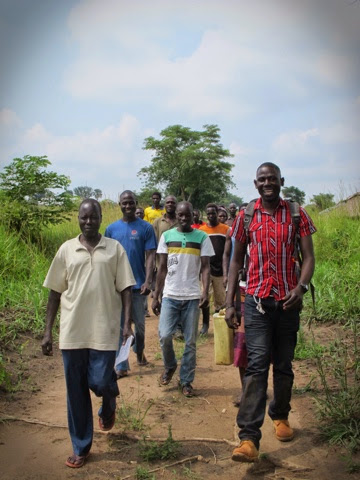 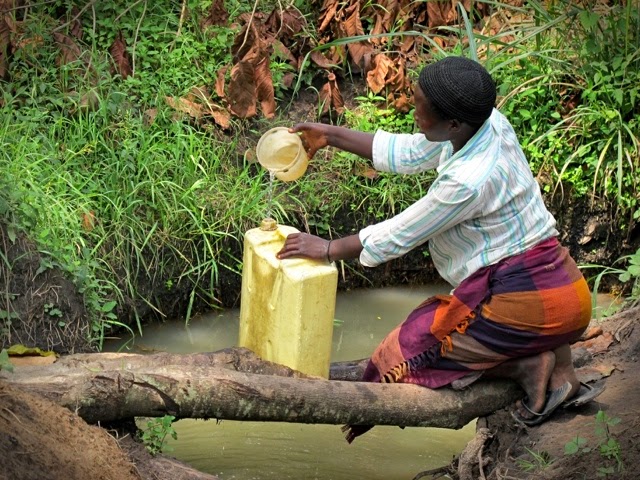 I shuddered thinking of sweet Aber drinking that water and felt a pang of sadness stab at my heart because just minutes earlier as we’d walked down the path, Agnes had leaned into me and whispered, “If you can’t take Olarra, take Aber.”  The desperation in her voice to give her children a chance at a healthier, educated life gripped me and I blinked back tears and told her I can’t take her children. 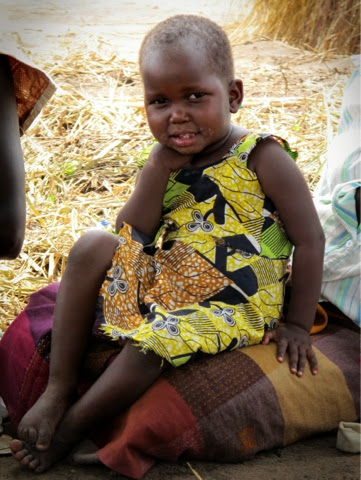 After Bitek surveyed the water hole we marched back up the hill. Bitek took several small side excursions off of the trail to examine all of the possibilities and then to cross some of them off because they were in the direct path of the elephants, who had trampled the tall grasses so flatly that it looked like large trucks had motored through.We paused under a large tree and Bitek declared that this would be the first drilling site.  If the well construction team reachedundrillable rock, they’d move further down the hill and drill at a second site.We finished tromping up the hill to where the rest of the community had gathered on mats in the shade of a large tree.  There were four chairs set in the front: one for Musee, one for me, one for Bitek and one for Denis.  As I went to sit in the chair beside Musee, Bitek pointed to the mats, “Women sit on the ground.”  He was half joking and half informing me of the culture.  I replied that I’d sit wherever the Musee asked me to.  Musee was quick to respond to Bitek, “Alicia sits in the chair beside me.” 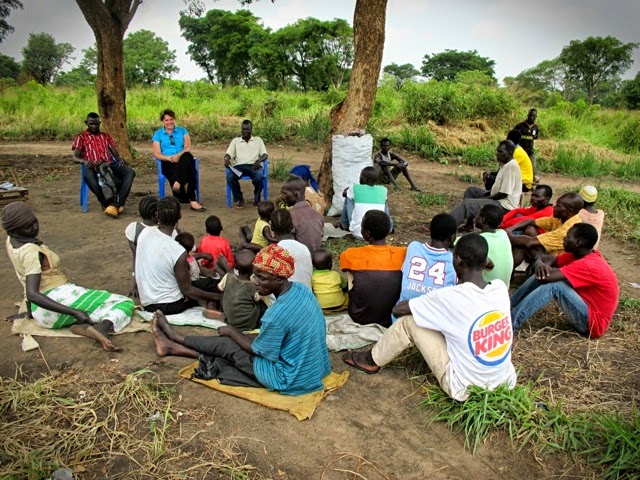 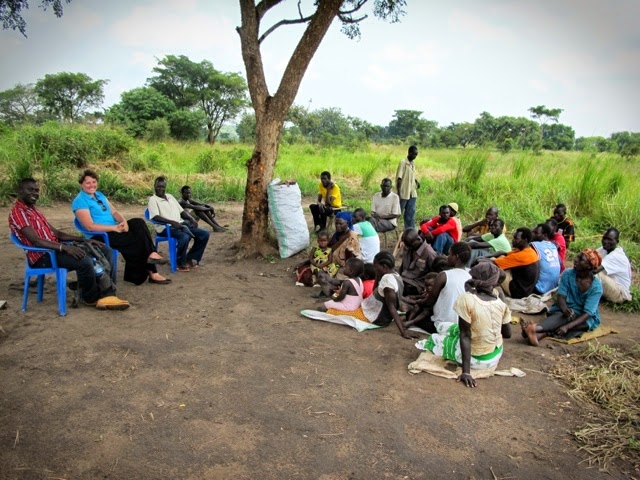 Denis spoke briefly, followed by the Musee.  Then it was my turn to speak.  I told the group how I’d done what I’d promised, I’d written their story and indeed people had responded.  I told them about how my little brother was spearheading money collection at home and they broke into applause and asked me to pass along their joyful thanks.  I told them how I’d placed a call to Bitek, the only person I know who knows how to build wells.Then I turned it over to Bitek who told them all the details of their coming well.  He told them about the well site and why he’d chosen it and about how the construction team trains the community members to repair and upkeep the well.  He told them about their responsibility to feed and house the construction team while the well was being built.  They had many questions and he answered each one with care.When would construction begin?

In one week after the construction team finishes building a well in the town of Sorotti.

How long would it take?

How many community members would they train to keep the well in working order?

As many as want to be trained.

Would they leave them the appropriate tools to maintain the well?

Repair of well only requires the use of one wrench.  I nodded emphatically when Bitek asked if I was including the purchase of the wrench with the well.

Would there be a possibility for the men they train to go out and build wells for them?

Yes, they take workers from each past well construction site to build wells at the new sites.

If there’s any money left over from the building of the well, could it go into their community microloan treasury?

My heart did a happy flip-flop at that and I answered, “Yes, definitely yes.”

When the questions had all been answered, we moved on to discussing the solar lights. One of the community members thanked me for the lights because he no longer has to buy and burn paraffin in his hut.  Denis told me that for the past two nights the wild elephants had come through the compound and when the people put their lights out, the elephants moved away.  Another member timidly asked if there were any lights still left because some of them had been sowing seeds for crops during the last meeting and didn’t receive a light.  Again I answered, definitely yes.

As the meeting drew to a close, one of the members spoke to Bitek in Acholi.  Bitek laughed and turned to me, “You’re building them a medical clinic next?”

“No, I don’t know anything about building a medical clinics, Bitek.”

Patrick, one of teenagers of Te Okot, spoke up, “Yes, Alicia, but you don’t know anything about building wells either.”  He smiled at me with a glint of mischief in his eyes.

Then it was time to say goodbye and get back on the dreaded boda boda.  My lower half protested as soon as I sat down.  After an hour on the motorcycle, Bitek and I stopped for a late lunch in the town of Annaka.  He ate goat.  I had beans and potatoes.

We talked about the other wells Bitek has built and then the conversation turned back to Te Okot.  “It’s going to be hard for them to get enough food to feed us.  Maybe you could buy the food and their contribution could be preparing it for us?”  Bitek suggested between bites of goat.

“Of course.  Just tell me what and how much to buy and where to buy it.”

After lunch, I told Bitek that I simply could not, could not, could not get back on the boda.  I was in too much pain so I would either walk the 52 kilometers back to Gulu, find a car to take me or, if necessary, take up residence in Annaka.

To my delight, Bitek found a taxi taking four other well-dressed women to Gulu.  It was leaving right then and for 10,000 shillings (roughly $4) I bought a seat in the taxi, a banged up Honda Accord.  Dear ones, let me tell you that may be the best four bucks I’ve ever spent.

Bitek insisted on following the taxi back to Gulu to make sure I made it there safely.  As I drifted in and out of sleep to the sound of the happy chatter of the women in the car with me, my rear end gave thanks for small things like taxis to Gulu and my heart gave thanks for larger things like glorious, clean water.