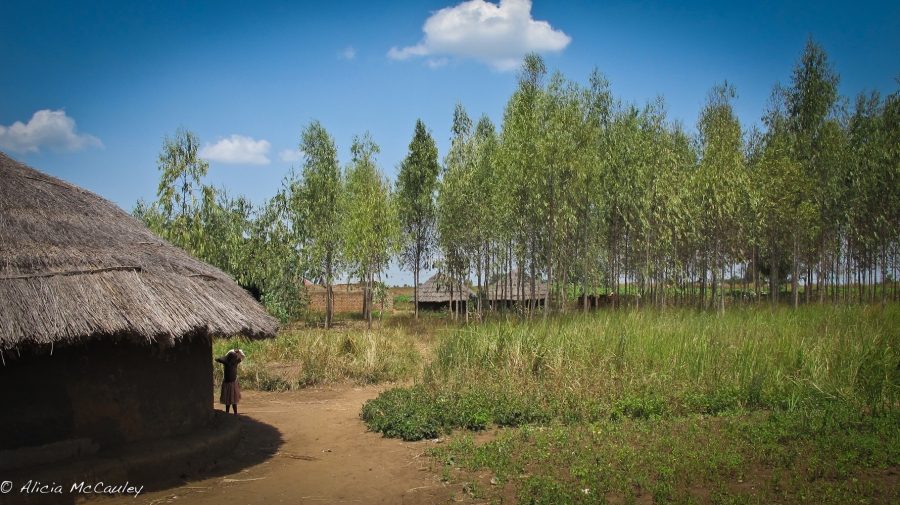 In the years of my absence, the elephants continued decimating their crops and some bold elephants were not frightened away by the solar lights we’d previously distributed. Given the choice between starving to death in fertile, sprawling Te Okot or moving until they can build up enough food stores to return, the families Te Okot returned to Bungatira or moved to nearby impoverished Aparanga.

When we arrived in Aparanga, it was wonderful to see so many familiar faces. Mamas were braiding their children’s hair. Chickens and goats were milling around in nearby crops. And Musee Lapyiem and his daughter Agnes were waiting to greet us.

The faces of the people from Te Okot were no longer gaunt. When I hugged them, I couldn’t feel each rib pressing into my arms through their backs. Life with the elephants took its toll and seeing them have the healthy bodies that come from having a regular food intake was such a relief.

Agnes had prepared chicken and malakwang (my favorite meal) in her father’s house. As we entered Lapyiem’s house, I smiled at the solar lights we’d distributed on my last visit, charging on top of his roof.

After the meal, we talked with Musee Lapyiem about the issue of a tractor. We hadn’t raised nearly enough money to purchase a tractor, but we were prepared to continue fundraising (though it might take years) or if there was a more immediate need, we were prepared to entertain it.

Musee Lapyiem decided that the best thing to do would be to bring the issue up to the families living in Aparanga. I also still had half of my birthday solar lights to distribute and being so far from electricity, small Aparanga was just the kind of place where they’d be put to good use.

So we proceeded to a small room where all of the community members, including the children, had gathered to meet with us. Denis, my former boda driver and the chairperson for the families from Te Okot who had relocated to Bungatira, began by introducing or reintroducing us. Then Laura introduced herself.

Then I spoke, first about how happy I was to see them all and how much I love them, then about why I was so delayed in returning to Uganda. I explained how we’d raised some funds, but not enough to fund a tractor and that we were open to hearing new ideas about how to best proceed.

I found myself asking a familiar question. “What do you need and how can we help?”

There was a lengthy, animated discussion amongst the community members about what to do. Members spoke up about how they needed something sustainable to help pay for the school fees and the university fees of their children. They spoke about how they needed something that would help them farm their land to create stores of food so they could eventually return to Te Okot to farm. I listened intently, straining to pick out the Luo words I know and to understand the issues at hand.

After some time, the community came up with an idea, but before executing the idea, it would have to be agreed upon by the people who had relocated to Bungatira as well. After all, though distance separates them, they remain one family, and a decision for one half is a decision for all. We would have to wait another day or two to hear the final decision.

At the end of the community meeting, Denis gave the members a lesson on how to use the new solar lights. There was cheering and clapping and too many thanks to count. One community member didn’t even wait to leave the room to start charging his phone.

One thought on “Light for Aparanga”