I don’t know about you, but yesterday was one of those days when I needed a bit of good news.

Yesterday Denis’ brother, Michael, was my boda driver.  We took a trip out to Fort Patiko, a former slave trading fort.  If I can stomach writing about that, I will, but right now it’s too fresh and the horrors humans committed against each other at that place are raw on my heart.

On the way back from Fort Patiko, we passed Bungatira.  Michael asked if I’d like to go and visit Mama.  I’d been wanting to see her, but in the small places of myself where I don’t have to be brave, I was afraid-afraid to run into the clan who’d poisoned the pigs, but mostly afraid that if Michael took me there again, he’d incur the same punishments Denis had.

I told him that I feared going to Bungatira and he assured me that I’d be safe and that Mama would be delighted to see me.  I tamped down the fear and willed myself to enjoy the sweeping, lush valley views on what will likely be one of my final trips to Bungatira.

Mama greeted me with warm hugs as did the remaining members of Denis’ family who are preparing to leave Bungatira for Te Okot.  The women and the children welcomed me and prepared my favorite dish-roasted maize. 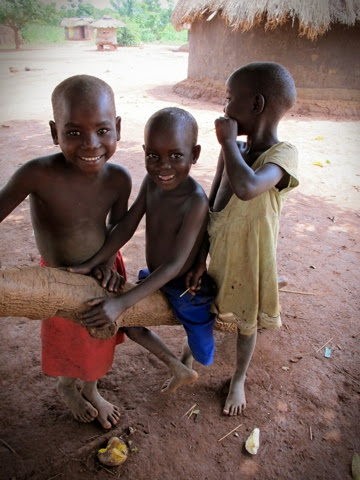 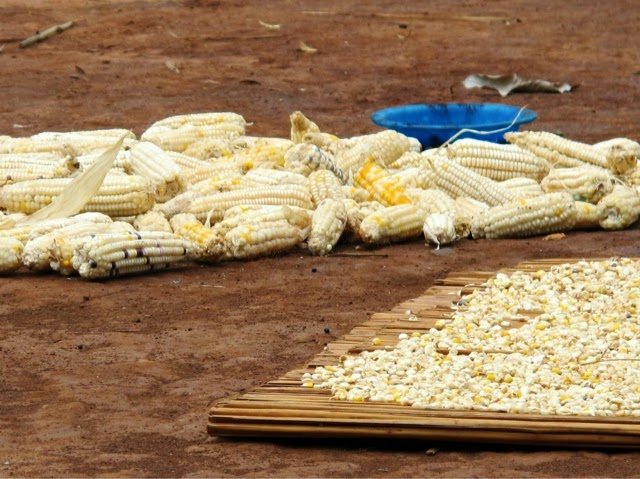 I sat in Mama’s hut, just listening to her.  Mama has a voice that bathes me in tender warmth and even though I only picked up words of Acholi here and there, the love in her eyes needed no translation.

As I was sitting with Mama, Michael popped in and asked, “Do you want to see the surviving pigs?”

“WHAT???”  I jumped off the papyrus mat so quickly that I almost slipped and landed keister over kettle on the mud floor.  “There are surviving pigs?  Where?  How many?  How?”

I followed Michael out of the hut and he led me to where two small piglets were munching away on something delicious in the bush.  I didn’t know whether to dance or cry or both.  Instead I sprayed more questions at Michael.

“Denis said that all of the pigs had been poisoned and died.  How did these two survive?  Can I take snaps to show the people at home?”

Michael nodded and I snapped pictures of the pair of piglets like it was their first day of kindergarten.  One is a male piglet and the other is his sister.  Michael explained that at the time the pigs were poisoned, the boy pig had been grazing elsewhere and that most likely when the boy piglet heard the pigs screaming from the poison, he ran farther away, but later returned. 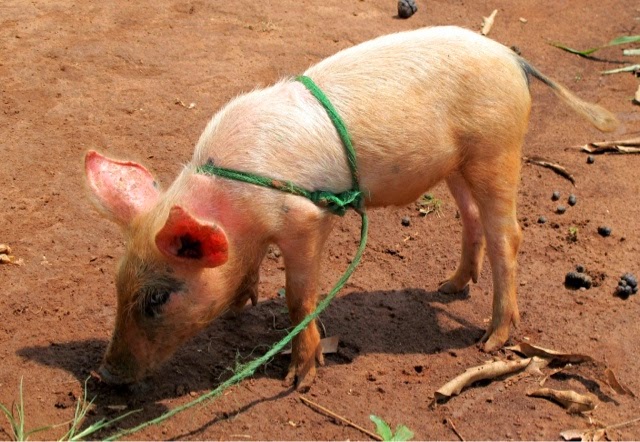 As Michael recounted that part of the story, I swallowed hard.  My stomach knotted itself at the thought of the pigs screaming because they unknowingly ingested poison.

“And the girl pig?” I stammered.

Michael explained that she ingested the poison, too, but they gave all the pigs medicine from the vet.  They were sure they were too late, but somehow when all the other pigs and piglets died, this strong piglet girl rallied. 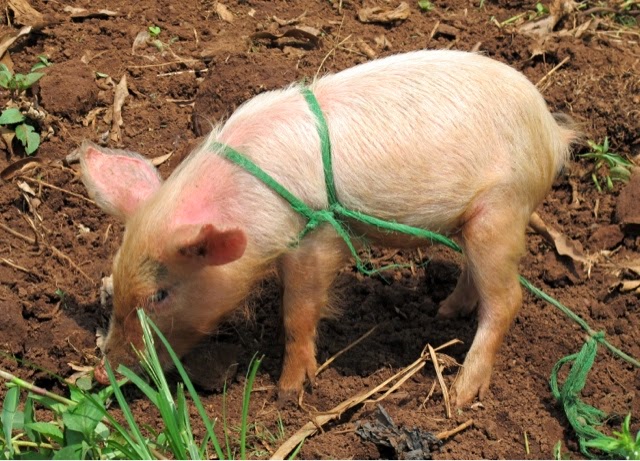 I watched the girl piglet push her snout, rooting through the earth, busy with the important work of growing fatter.  She and her brother wore ropes tied like dog leashes so that the family could keep the two pigs on the compound, where they could be kept safe.

I continued to click photos, but stopped snapping when I reached the piggery.  It was empty and I felt a hollow pit in my stomach.  The piggery was full of noisy pigs the last time I saw it and now it feels too big, unsettling in its quiet. 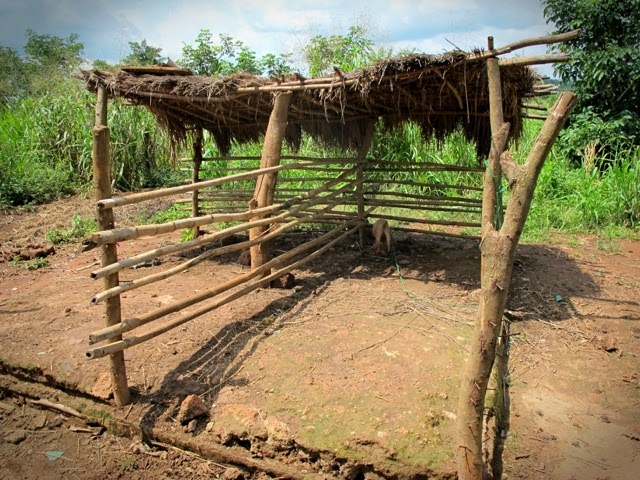 It was time to move the two pigs into the shade near the piggery.  Michael led the boy and I led the girl.  The boy squealed and grunted and dug his heels into the ground.  The girl walked beside me, snuffling around my feet. Her curly tails flicked and wiggled and thwapped against my leg.  Michael said the curl in her tail is a sign that she’s regained her health.

Good news often comes from the most unexpected places and today it came in the form of a fat piglet and her spring of a tail.