If you’re just joining the story of Finding Denis, you can read Part 1 here.

There isn’t power in Gulu today, but I’m at a place with a generator so as long as the generator holds out, I’ll write as much of the story about Denis as I can.

I waited outside my hotel for Denis to arrive.  A live band played and people danced around the plastic tables and chairs dotting the patio.  The mood was in stark contrast to my own.  I waited with rocks in my stomach for Denis to arrive safely from Te Okot.  Traveling such a long distance at night is still touch and go here, like the ghosts of war still linger in the haunted nights.

Denis arrived and I felt my whole body sigh with relief.  I hugged him too tightly and probably too long for what is appropriate here and I just didn’t care.

My friend was alive and safe and here.  And in that moment little else mattered.

We sat at a table and over bottles of soda, he unpacked his story. It begins in Bungatira, Denis’ village, the same village that welcomed me so warmly, the village that had a beautiful little democracy in place.  You’re undoubtedly noticing my use of past tense here.

Bungatira captured my heart and the hearts of so many of you that, to be truthful, my eyes are welling up and my fingers are shaking at what I have to tell you next because I know it will break your hearts as it did mine.

Bungatira is composed of ten different chiefdoms, all part of the same clan, all part of the same tribe.  To think of ten different chiefdoms living peacefully on the same land is a miraculous thing in my eyes.  Thirty-eight years ago, Denis’ grandfather, a member of the Aria chiefdom was given a piece of land in Bungatira from the Pawel chiefdom who owned the land.  When a piece of land is given or purchased, the rights of the land are supposed to transfer to the new owner.

The community group in Bungatira was composed of all ten chiefdoms and in the last few months the relationship between some of the Pawel chiefdom and some of the other chiefdoms, including the Aria, had begun to fray, to come undone.

Last summer when the community group made changes to their Constitution and in many ways moved forward, the specific members of the Pawel began to show their displeasure.  When Denis, the chairperson of the group, returned to school and the group began to do things like bring in counseling for members suffering from PTSD and to distribute microloans for farm equipment and school fees for their children, the power began to slip away from the Pawel, who were the largest in number and therefore the predominant chiefdom.

Here land is life.  Land is power.  Land is everything.

As Denis’ pigs grew and reproduced and as he excelled in school, others in the community group began to follow suit, returning to school, earning a living and sustainable income.

With the power trickling through their fingers, the Pawel told Denis’ family and some other Aria that they must leave.  Time and again Denis and his family tried to reconcile the differences,to thread things back together, even calling the Pawel and Aria chiefs together to come to a resolution.

Another factor was that Denis had brought a mzungu (a white person) into their community and in their eyes, I’d  caused a tidal wave of unwelcome changes.

At that part of the story, my eyes spilled over.  I felt hot vomit sizzling in my stomach.  What had I done?  The band continued to play and people danced as my hot tears splattered in the dirt.

“It’s not your fault, Alicia.  You did a great thing for me and for my family,” Denis held my gaze.

Specific members of the Pawel spit threats at Denis and his family, threatening to kill them if they didn’t leave.  To prove their point, one morning in early June, just after the boda driver killings had subsided, and Denis was at school, they poisoned his pigs.  He returned from school to find most of his pigs and piglets dead.

My heart was appalled.  How could they commit such a crime and not be punished?

It goes back to power.  The Pawel were the original land owners and becaus engle far outnumbers their Aria, the fact that Denis’ family has lived there for almost forty years holds no weight.

So Denis and his brothers and his father travelled to Te Okot, approximately 120 kilometers from Gulu to meet with the chief of the Aria to ask permission to return to the original land of the Aria.

The chief granted their request and for the last month Denis and his brothers and their family have been rebuilding their life.  They’ve built small thatch huts to live in, so small that to my eyes they look like haystacks.  They’ve planted their garden so that they will soon have food to eat.

Too far from Gulu to rent a boda and drive a boda for a living, Denis had been logging trees by hand and burning them into to charcoal, which he’s been selling by the road.  A medium-sized tree wields a sack and a half of charcoal, each sack about five feet tall.  Each sack sells for 20,000 shillings, or approximately eight dollars.

I can’t even fathom losing my home, my opportunity for education, my livelihood in one swoop.

“So I came from Te Okot tonight to tell you not to go to find me in Bungatira.  I’m not there and it’s not safe for you to go there alone.”  Denis took a last sip of Mountain Dew, warm in the bottle.

“You came all this way tonight just to make sure I wouldn’t be in danger?  I’m sorry, Denis.”

“I knew you wouldn’t stop looking for me until you knew I was safe.  And I wanted to tell you myself why I’m not around, but I couldn’t afford minutes on my phone and there’s not electricity in Te Okot to charge my phone.  So here I am.”  Denis smiles and I can’t fathom how he can be smiling. “Don’t worry.  We’re okay.  We’re good now.”

“But what about school?  Don’t you want to keep going to school?”

“Yes, but there aren’t schools near Te Okot.  And I have no way to get to school.”

I think of my wallet, stuffed with dollars intended for the Bungatira group treasury.  I can’t bring myself to give the remaining members of Bungatira the money after what has been done by the Pawel to Denis and his family. The group in Bungatira mostly disbanded after the pigs were poisoned.  I think of the remaining chiefdoms there, powerless against the Pawel and yet unable to move and my heart breaks for them.  I understand why they disbanded, understand how hard it would be to continue to live under the guise of democracy with the bloody underbelly of tyranny.

I swirl the remaining drops of orange Fanta at the bottom of my soda bottle.  Through my anger, through my guilt and sadness, familiar words rise from my throat and are a salve the moment I say them.

“Denis, what do you need and how can I help?  I’ve been raising money for the Bungatira treasury.  I was going to surprise the group with it, but now it feels like it should go with the members of Bungatira who are relocating to Te Okot.”

“Can you come to Te Okot tomorrow and meet with the chief and the rest of our chiefdom?”

“It would be my pleasure.  You mentioned that there isn’t electricity near Te Okot.  Would solar lights be of any use?”

“Give me your bag.”  I hold my hand out and he gives me his messenger bag covered in the red dust that coats everything here.  I race upstairs and pack twenty-five of the small solar lights and eight of the charging solar lights into his bag to give to Denis and the people I loved in Bungatira and can’t wait to see again in Te Okot.

“You will love Te Okot.  It’s along the River Nile and we will see tribes of elephants roaming free.”  Denis says it so matter of factly and for the zillionth time since my first trip to Uganda, I realize just how little I know about the world around me.

As I fall asleep that night, I feel the warmth of gratitude in my cheeks because my friend is safe, his family is safe, a village will soon have light and most of all in the midst of humankind at it’s most vile, there are still peaceful places in the world where wild elephants roam free. 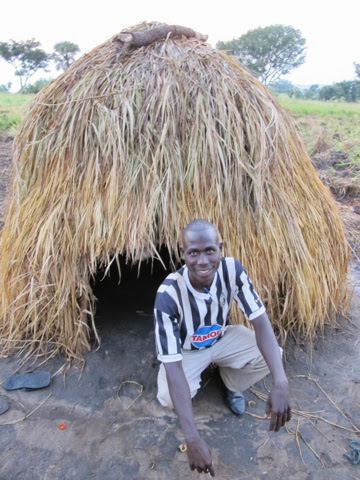 One thought on “Finding Denis, Part 2”